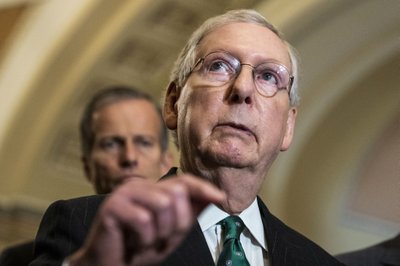 Trump, who answered questions before reporters at the White House, reaffirmed his support for Kavanaugh, saying it is “a scary time for young men,” who could potentially become the subject of false accusations and be seen as “automatically guilty,” according to The Associated Press.

“I really think that Judge Kavanaugh is going to be accepted and voted on and positively voted on, but we’re gonna have to see what the FBI says. They’ll come back with a report,” he added.

With regard to sexual assault accusations in general, Trump said, “You could be somebody that was perfect your entire life, and somebody could accuse you of something. It doesn’t necessarily have to be a woman, as everybody says, but somebody could accuse you of something, and you’re automatically guilty. But in this realm, you are truly guilty until proven innocent. That’s one of the very, very bad things that’s taking place right now.”

McConnell said Tuesday that “the politics of personal destruction were willfully unleashed” by Democrats in Congress, and that they were opening “the floodgates of mud and muck” against Kavanaugh.

“This is not politics as usual,” he added.

McConnell criticized accuser Julie Swetnick’s lawyer Michael Avenatti for having represented Stormy Daniels, calling him a “tabloid lawyer.” He also criticized Swetnick, who accused Kavanaugh of sexual assault, for being unreliable, saying “there conveniently happened to be zero witnesses” to corroborate her story, according to The Associated Press.

Following these comments, the New Haven Police Department in Connecticut released a report including an accusation in which Kavanaugh threw ice at a man in a bar during an altercation in 1985. In the report, Dom Cozzolino, who was 21 at the time, also alleged that he was hit in the ear with a glass from the bar.

The Trump administration dismissed the accusation as irrelevant to the sexual assault accusations, adding that Kavanaugh was neither charged or arrested after the alleged incident.

As of Tuesday, Kavanaugh actively denies the three accusations of sexual assault against him. The three include Christine Blasey Ford, who accused him of assault during a party when they were both in high school; Deborah Ramirez, who accused him of exposing his sexual organs to her at a dorm room party at Yale; and Julie Swetnick, who accused him of taking part in gang rapes of women with other men, according to The Associated Press.

Jeff Flake, a Republican senator, stated he was uncomfortable with the “sharp and partisan” response Kavanaugh gave to the allegations and to questions by Democratic senators during his hearing.

“We can’t have this on the court, we simply can’t,” he said. Two other Republican senators, Lisa Murkowski and Susan Collins, are also undecided whether they will vote to confirm Kavanaugh at this time. When asked about whether McConnell would push the confirmation vote to happen this week, Murkowski said that he “talked about a vote last week, too,” according to The Associated Press.

Editor’s Note: Information from The Associated Press was used in this report.