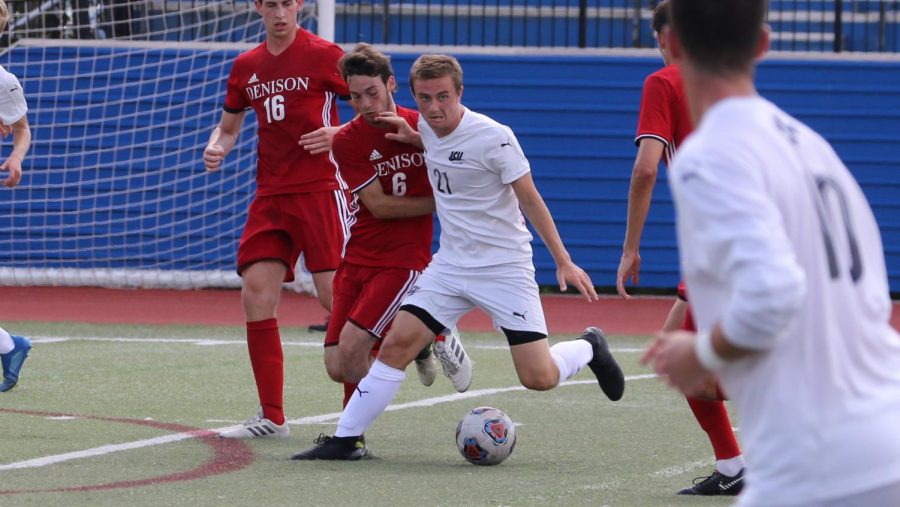 On Saturday, Oct. 20 , John Carroll University’s men’s soccer team came out victorious against their Ohio Athletic Conference opponent, the Marietta Pioneers, by a score of 1-0.

In the OAC matchup, the Blue and Gold put on their best effort on the defensive side of the field as they blanked the Pioneers. It is hard for one team to control the other in a matchup between two teams from the same conference, but the Blue Streaks did just that. An important catalyst for the stingy play on defense was senior goalie Liam McIntosh.

McIntosh’s play was essential for the Blue and Gold, as he recorded five key saves. If any of the five had found the back of the net, it could have turned the tide in the inner conference matchup. In a game of defensive struggle, Mclntosh was the stabilizing force for the Blue and Gold, keeping them in the game with his outstanding play.

With the game between the Blue Streaks and the Pioneers being a defensive slug fest, someone would need to break the ice for the all-important score.

Freshman forward Jared Mattei broke through the Marietta defense to score the Blue Streaks’ first and only goal at the 64-minute mark of the game.

While the go-ahead goal was scored by Mattei, the unsung hero was the man who set up Matteii to be in the best possible position to score a goal. That person was senior forward Jarrod McDowell.

Mattei told The Carroll News after the game that McDowell was instrumental in his getting the score, saying, “He played a really good ball through the defense and I cut the ball back to my right foot and shot it with the inside of my foot to the back post — and it went in.”

The senior-to-freshman combo of McDowell and Mattei was the spark the Blue and Gold were looking for, with McDowell finding a crease in Marietta’s solid defense and Mattei using that opportunity to get the score.

With the win against the Marietta Pioneers under their belt, the Blue Streaks now move up to 10-4-1 on the season and 6-4-1 in OAC action. While the win was a sweet one for the Blue and Gold, they will need to refocus quickly as their next opponent will be another OAC rival in Heidelberg University on Oct. 24 in Tiffin, Ohio.