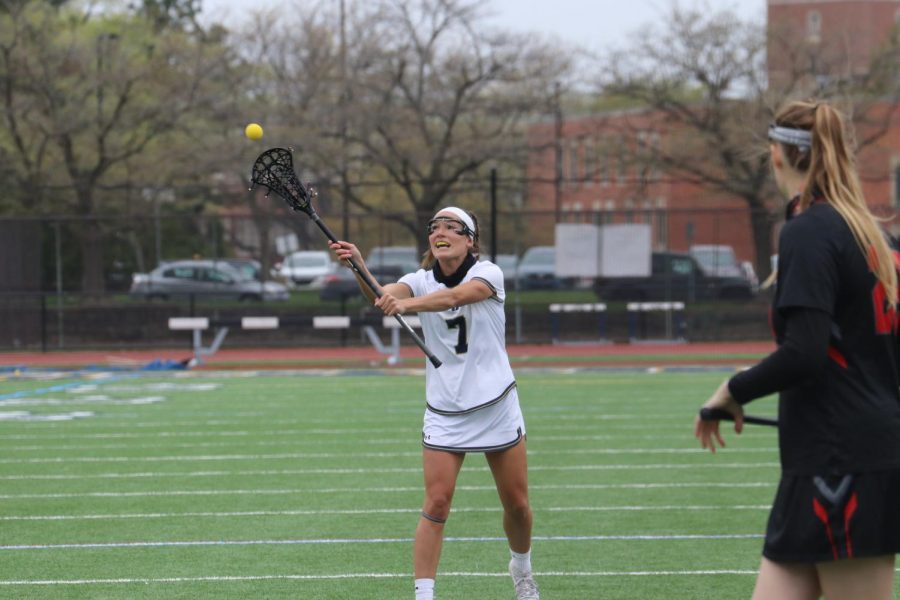 Senior Colleen Grombala sends over a pass to a teammate against Muskingum at Don Shula Stadium on April 24, 2021.

The John Carroll University Women’s Lacrosse Team bounced back from a series of unfortunate events with a 25-1 rout over Muskingum at Don Shula Stadium on April 24. One week before Saturday’s contest, the Blue Streaks lost their first game of the season on Saturday, April 17, in a 18-17 loss against the Capital Crusaders. They also had  their following game against Mount Union on Wednesday night canceled due to COVID-19 restrictions.

Saturday’s victory resulted in the Blue Streaks clinching the No. 1 seed in the Ohio Athletic Conference Tournament after improving their record to 14-1 on the season. With the win, JCU also secured sole possession of the OAC regular season title for the first time in program history.

“I am proud of this team for not only their win today, but their grit this entire season,” said Head Coach Rachel Dell. “We have faced adversity that we never planned for, and they never wavered in their focus on winning the regular season.”

The key leader in the win for the Blue Streaks was graduate student standout Colleen Grombala, who has been at the helm of the John Carroll offense this whole season. She leads the team, OAC and all NCAA Divisions of lacrosse with a total of 83 goals on the season.

On Saturday, Grombala was the setup player for the underclassmen. She recorded 11 assists, which broke a new school record for the most assists by a player in a single game. This record was previously set by Grace Curatolo on April 6, 2018, when she tallied nine assists. Grombala finished the day with two goals, nine draw controls, 11 assists and 13 points.

The Blue Streaks wasted no time when they took the field. Less than two minutes into the game, junior Alex Heishman scored the first goal for the Blue Streaks. From this point on, the offensive momentum for JCU never diminished.

Heishman continued her hot streak, capturing a hat trick and a total of four goals throughout the game.

The other standout star for John Carroll was junior attacker Claire Mezzoprete, who came into the game after posting a career-high three goals in the Blue Streaks’ loss against Capital. Mezzoprete built upon her success, notching a new career-high four goals against Muskingum.

Juniors Jill Jarem and Jenna Ginsberg also contributed to the victory. The duo from the class of 2022 each tallied three goals, respectively.

John Carroll was led in goals by senior Kaleigh Kotula who was taken out at the 17:44 mark of the first half due to the early 10-0 John Carroll lead. She grabbed one save in her time in the net. Sophomore Maddie Munding finished the game for the Blue and Gold, capturing two saves and allowing one goal.

By locking the top seed, the Blue and Gold clinch home-field advantage throughout the entire OAC Tournament. John Carroll will faceoff on Thursday, April 29, against an opponent that will be determined at a later time.