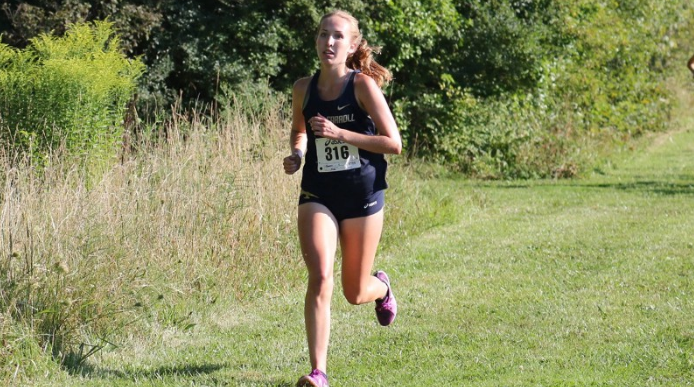 The Blue and Gold shined near the Golden Dome on the campus of the Fighting Irish, as the women finished in third place in the Non-Division-I standings. JCU finished third collectively in the race, which featured 15 teams.

Their third-place finish came against Division-II competitors, which may have led to a tough competition. Against Division-III opponents, the Blue and Gold finished first overall with 125 points.

Freshman Cameron Bujaucius finished the race in 18:53.39, the top finish for John Carroll in the five-kilometer race. Bujaucius’ posted the sixth best time in the non-Division-I race.

Bujancius’ outstanding week in South Bend, Indiana at the Catholic Invitational was recognized by the Ohio Athletic Conference.

Fellow freshman runner Shauna Glavin was the second-best JCU runner, with a time of 19:58.34, which was good for 17th place finish.

Placing 18th as the Blue Streaks’ third finisher was junior Jamie Amoroso, landing a time of 20:00.62.

Junior Lyla Graham was the top finisher for the Blue and Gold in the Open Race which is unscored, with a time of 21:05.46, good for 24th overall.

The Blue Streak runners have two weeks off until competing in one of the most important races of the season. JCU will travel to Norton, Ohio, for the All-Ohio Championships on Sept. 29.

JCU just has one other race in Akron before the Ohio Athletic Conference Championships on Oct. 27 in Harteville Ohio, hosted by Mount Union.