Springtime Snow: Sign of resiliency or cause for concern? 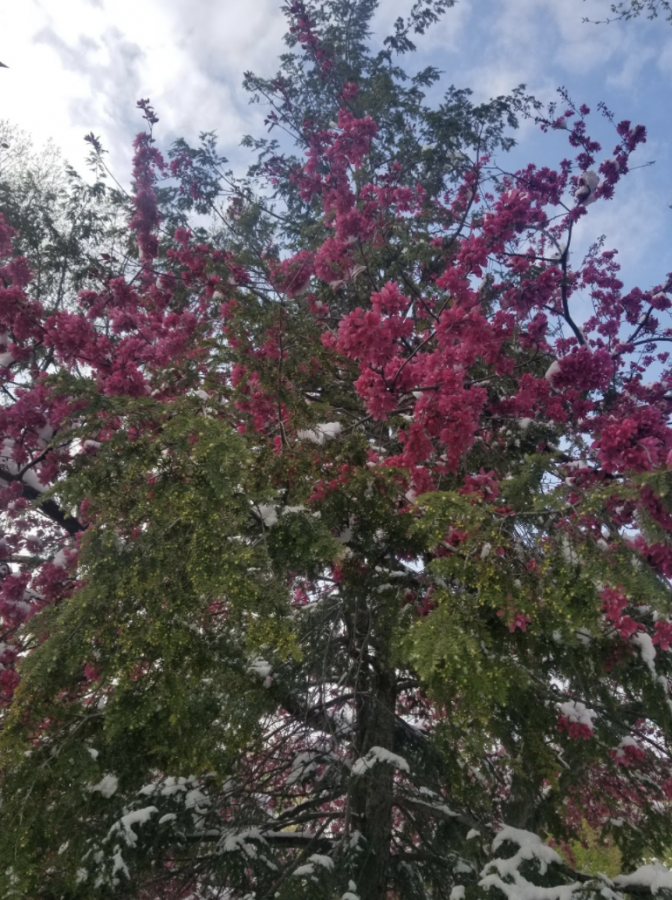 We know what April showers bring, but what happens when April snow suddenly and mysteriously blankets the quad? Should we be glad or worried about a disrupted climate? A couple days of springtime snow are not uncommon in Ohio. Thousands of miles north, however, ice is melting in the polar regions. This has escalated the global average temperature to record levels.

Many people might wonder why they are slipping on sleet and ice in April following one of the warmest years on record. Some marvel at the beauty of winter while others perceive both joy and danger in this phenomenon. “It feels weird to see snow glistening over the tulips and cherry trees,” said Lucy Peloso ‘21. While this description is elegant, springtime snow is no miracle. It signifies a perilously disrupted climate with a distant, surprising cause.

Peloso, a Biology major familiar with climate change impacts, said that snow threatens “all of the spring flowers and creatures that had emerged.”As is the case in Ohio, climate change alters habitats and growing conditions in all regions. Many plant species throughout the U.S. are flowering much earlier in the spring. One of the first perennials to bloom, even beneath the snow, is the tulips.

The weeping cherry tree, native to Ohio, is one of the first trees to bloom in the spring. Its name symbolizes the impacts of climate change, as its branches often bear the season’s last snowfall. To Ohioans, climate change might seem like a fantasy. In fact, many are surprised to see that human actions disrupt weather patterns that existed long before we named plants and animals.

It is chilling to consider that human activity causes such drastic, negative effects. Yet we hope and trust that our small, sustained efforts will positively influence the world with equal intensity.

We should be amazed but also conscientious during this extreme weather. Our carbon footprint may soon stomp out the daffodils and hyacinths, much more definitively than our indifference now would have us believe. Peloso emphasizes that “nature is resilient.” All students can cultivate this outlook at the end of the school year. The flowers sparkling with snow demonstrate that we can bear challenges, conquer disruption and emerge stronger.