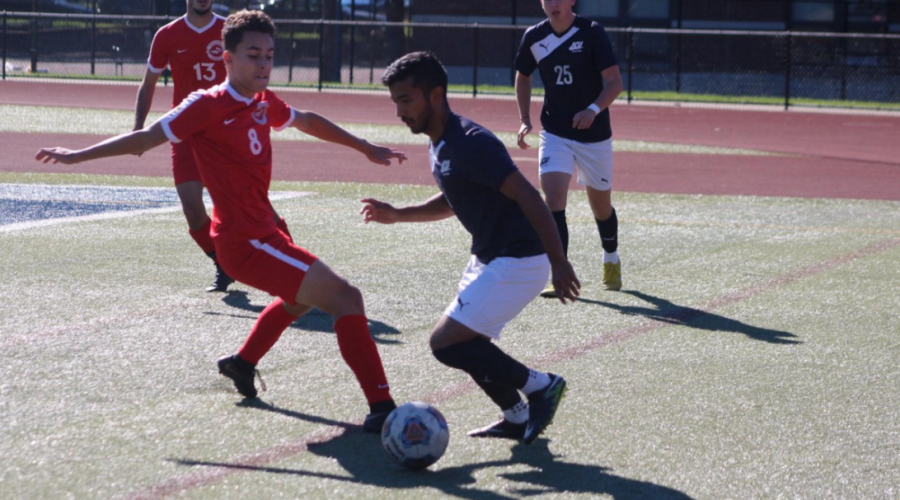 Senior Chad Kanakkanatt cuts to his left around a Muskingum defender, eyeing for his second assist on Sept. 29. JCU’s Kanakkanatt had a goal & two assists.

Through the first eight games of the season, the John Carroll University men’s soccer team only compiled 13 goals. The Blue Streaks’ goal scoring woes shifted on Sept. 29 in the first game of Ohio Athletic Conference play, with an eight-goal shutout against the Fighting Muskies of Muskingum.

The last time these two teams played was on Oct. 28, 2017, and the contest ended with similar results. On a senior day and homecoming at Don Shula Stadium, the Blue and Gold ousted the Fighting Muskies by a score of 8–1.

It only took 40 seconds for JCU to quickly separate themselves with a multi-goal lead against Muskingum. Senior Brian Lutz lined up for a penalty kick, scoring his second goal of the season.

Before the half ended, freshman Lawrence Cersosimo and senior Jared McDowell netted two additional goals to establish a 4–0 Blue Streaks lead at the half.

Apparently four goals were not enough for the Blue and Gold, as Cersosimo found the back of the net for the second time of the day at the 60:32 mark, extending the lead to five scores.

Senior Chad Kanakkanatt, freshman Jared Mattei and junior Mikey Burrington each added a goal in the following 15 minutes, capping the night off with eight goals, as a team, in the win.

It would be fair to say senior Liam McIntosh had one of the easier nights of his four-year career defending the John Carroll goal. McIntosh only faced one shot on goal in 90 minutes, posting his first shutout win of the season.

If there was a game ball to give, Kanakkanatt would receive the reward. He finished with a goal and two assists in the game, posting his first career game with two assists.

The Blue Streaks’ next two tests will feature the Mount Union Purple Raiders on Oct. 3 and the Capital Crusaders on Oct. 6.

With the 8–0 win against Muskingum, the Blue Streaks improve to 5–3–1 on the season, with an undefeated conference record of 1–0.