The Carroll News • May 4, 2021 • https://carrollnews.org/92277/uncategorized/jcu-mens-lacrosse-locks-in-second-spot-for-the-oac-tournament-by-conquering-otterbein/ 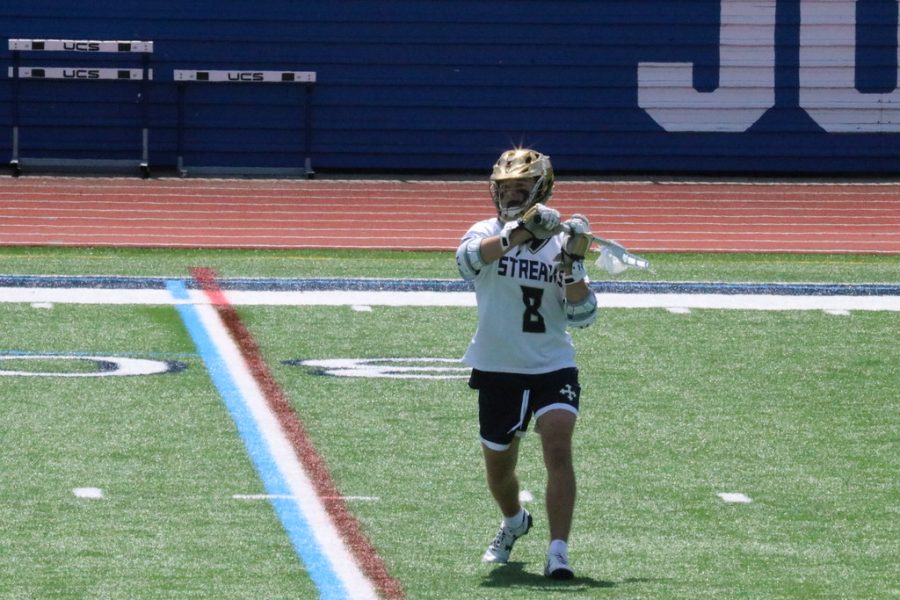 The John Carroll University Men’s Lacrosse Team locked in the second seed position in the Ohio Athletic Conference Tournament after a victory in their final regular-season game against the Otterbein Cardinals on Saturday, May 1 in University Heights.

The Blue Streaks defeated the Cardinals 14-2, boosting their season record to 12-1.

The Blue and Gold started off strong with graduate student standout Skyler Blake scoring his 90th goal of the season only five minutes into the match, giving John Carroll a 1-0 lead.

After five more minutes of play, senior midfielder Kevin Hack added another goal for John Carroll, pushing them up 2-0.

The sophomore duo of Matt Berdysiak and Tanner Gill-Snow rounded out the first quarter with two more scores, putting the Blue Streaks ahead of Otterbein 4-0.

The Cardinals did not back down and began the second quarter with a goal of their own, looking to start a comeback.

Berdysiak did not allow the momentum to shift in favor of the Cardinals, as he found the back of the net for the second time this game.

The Blue and Gold pushed their lead even further as graduate student Bennett Gorman finished his first shot of the match, making the score 6-1 going into halftime.

Starting the third quarter the Blue Streaks hit the gas on offense and never looked back.

Hack began a scoring spree for the Blue Streaks, recording his second goal of the game. Senior Brendan Whitty scored a duo of goals while junior Ian Flynn, and sophomore Matt Russo tallied individual goals as well, putting the Blue and Gold ahead 11-1 at the start of the fourth and final quarter.

The Cardinals did not lose hope and scored in the fourth quarter, which was quickly retaliated by junior Cullen Zarek.

When the buzzer sounded, the scoreboard favored John Carroll 14-2, giving them their final regular season win on senior night.

With their successful season, the Blue Streaks have earned a first round bye in the OAC Tournament, which starts on Tuesday, May 4.

“We are extremely focused on capturing an OAC championship and extending our season into the NCAA tournament,” said John Carroll University Men’s Lacrosse Head Coach Joseph Rautenstrauch. “We feel that we are catching our stride right now and will be a dangerous team in the OAC tournament and beyond.”

The Blue and Gold Men’s Lacrosse Team will start their OAC Tournament campaign on Thursday, May 6, as they host the semifinal matchup against the highest remaining seed.