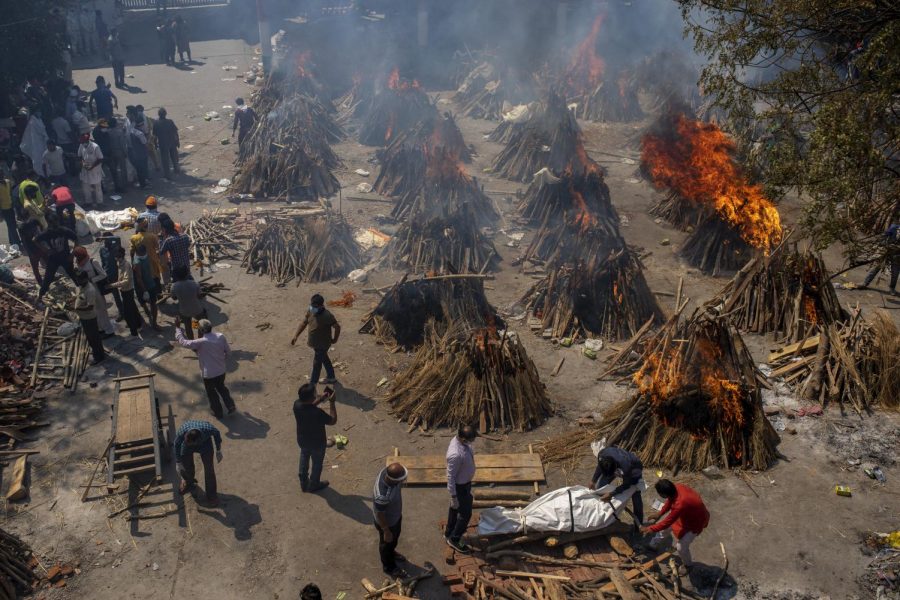 According to CNN, India accounted for half of the new COVID-19 cases globally in 2021. India wasn’t prepared for this second wave; hospitals are overflowing and running out of oxygen. Crematoriums have run out of wood as bodies pile up. Only 2% of India’s entire population has been vaccinated, even though the country is the world’s biggest producer of COVID-19 vaccines, according to Reuters.

On May 1, India reported 401,993 new cases of the virus and the deaths jumped to 3,523, taking the country’s total to 211,853. With cases so high and with no signs of slowing down, the citizens of India have become enraged at the government according to CNN.

“The number of COVID deaths is staggering,” said Cliff Anthony, an Indian native and Cleveland-based journalist. “Among them was one of my cousins.”

Many believe that the recent surge was the fault of Modi and his Hindu nationalist government. Julia Hollingsworth reported that Modi didn’t prepare for a second wave of COVID-19 and also encouraged large gatherings at Hindu festivals and political rallies.

“The second deadly COVID-19 surge in India could have been prevented if Prime Minister Narendra Modi put people’s safety first instead of focusing on his political career,” Anthony added.

Anthony said that Modi didn’t urge his supporters to wear masks or to follow the six-foot distance and other restrictions during his recent crowded election rallies.

Priyanka Gandhi Vadra, the general secretary of the opposition Indian National Congress, tweeted, “The government has failed us all. Even those of us who oppose and fight them could not have foreseen a complete abdication of leadership and governance at a time as devastating as this.”

With many in India feeling the pandemic was over, there was a slower uptake of vaccines than expected in early 2021. However, cases started to spike again in February. Modi and his government still claimed that India, “defeated COVID under the able, sensitive, committed and visionary leadership.”

As India’s cases began to rise even more, Modi stayed silent and didn’t call for a national lockdown, which angered many people. The hashtags #ModiMustResign and #ModiMadeDisaster quickly went viral on Twitter, according to Hollingsworth. Seeing as the country viewed Modi as a saintly figure who always acted in the nation’s best interest, this uproar of anger and resentment was a surprise.

Modi has enacted “micro containment zones” but has left the implementation and locations up to the individual states. CNN reported that eight of India’s states have some form of lockdown, including the capital of New Delhi, which is in a complete lockdown.

“The health system in India is arcane, and it is not prepared to handle such major outbreaks, let alone a minor one,” said Anthony. “The Modi government should mobilize all its resources to combat the pandemic and let the health professionals do their job without political interference.”