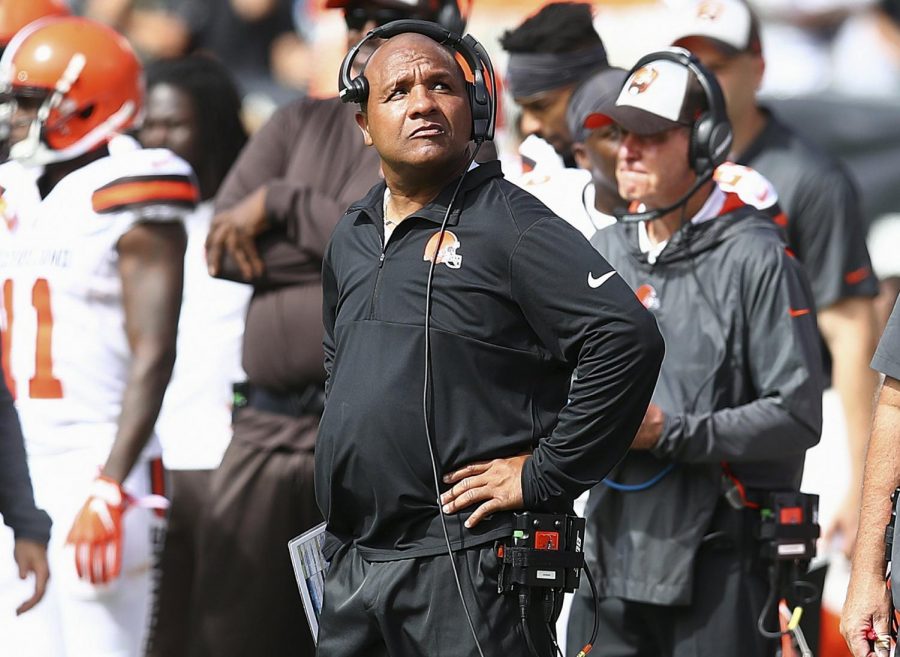 Cleveland Browns head coach Hue Jackson watches from the sideline during the first half of an NFL football game against the Oakland Raiders in Oakland, Calif., Sunday, Sept. 30, 2018.

The most questionable decision in all of sports was made when Cleveland Browns owner Jimmy Haslam decided to bring back head coach Hue Jackson for a third season.

Coming into 2018, Jackson led the Browns to a 1-31 record. Under the leadership of Jackson, the Browns endured the second 0-16 season in NFL history and looked lifeless in every single game played.

Jackson and Sashi Brown, the executive vice president of football operations, were the anchors of the ship that sank. Clearly one of them had to go, so Brown was fired and Jackson stayed.

I am not saying it was the wrong decision to fire Brown and keep Jackson, but the fact that the Browns kept an incompetent fool to coach their football team is inexcusable. At least they did well with hiring John Dorsey as general manager.

Jackson is the biggest coward in all of football, always shifting the blame towards someone else. In 2016, it was Brown not providing him with enough talent. In 2017 the same excuse was made, and he continually threw quarterback Deshone Kizer under the bus. This time around, in 2018, it is offensive coordinator Todd Haley.

Hue, it is time for you to go. No more will I support a head coach that is the worst in NFL history to coach this football team.

Mr. Haslam, this last line is for you. When you let Hue go, hire a football coach. A REAL football coach. Not Rob Chudzinski, not Mike Pettine and certainly not Hue Jackson. The Browns have the talent and it’s time for the Browns to WIN NOW.